by Jill Wheeler and Del Atkinson 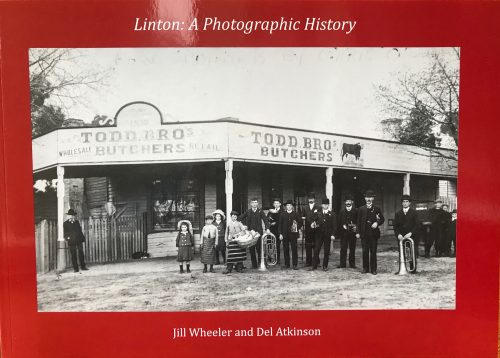 Published in December 2017, this is a history of the small gold rush town of Linton as told through selected photographs from the collection of the Linton and District Historical Society, many never before published.

Chapters include: Beginnings, Gold, The Early Town, The Later Town, Agriculture and Industry, Education, Religion, Sports, Clubs & Societies, Linton People, Celebrations and Commemorations. With over 100 pages of historic black and white photographs, many never published before, you won’t want to miss out on your copy of this piece of Linton’s history.

The book is available for purchase at $30 from the Historical Society. Mail Order is $30 plus postage and handling of $12 per book. To order, email us at enquiries@lintonhistory.org.au

It is also available from Wares, Plants ‘n Things, The Known World Bookshop or the Shire Offices, all in Sussex St, or in Ballarat at Collins in the Bridge Mall, or Ballarat Books.

Linton Makes History: An Australian Goldfields Town and its Past
by Jill Wheeler 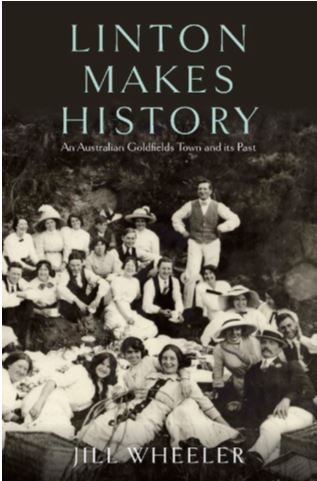 Published in 2015, Linton Makes History is based on Jill Wheeler’s PhD on the history of Linton. This is a detailed and scholarly history of the town and its people from the indigenous past through multiple layers of immigration to the present.

‘This is one of those rare local histories which illuminate the experiences of an entire community, rather than just cataloguing important people
and events. Jill Wheeler takes us deftly through the multiple layers
of Linton’s past from her unique perspective as both “insider” and
“outsider”. There is deep scholarship behind this engrossing story,
so movingly told. We know Linton—and Australia—much better for
having this book.’

—Professor Peter McPhee, University of Melbourne, who launched the book in the Shire Offices in August 2015

The book is available for purchase at $30 from the Historical Society. Mail Order is $30 plus postage and handling of $8.00 per book. To order, email us at enquiries@lintonhistory.org.au

It is also available from Wares, Plants ‘n Things, The Known World Bookshop or the Shire Offices, all in Sussex St, or in Ballarat at Collins in the Bridge Mall, or Ballarat Books.

A walk-Drive Tour of Linton

A Walk-Drive Tour of Linton, is a booklet containing two history walks around the town of Linton and one drive around the surrounding district.

There are detailed maps of each walk and of the walk/drive, and an estimated time in which each could be completed. At the beginning of the book is a brief history of Linton, which provides a context for the walks.

[This publication is currently out of print but will be updated and re-published in the near future].

DVDs of Our History Night Talks

For the past few years we have been making DVDs of our guest speakers’ talks at History nights, which can now be purchased for $10 (+ $5 postage and handling).  To order DVDs email us at enquiries@lintonhistory.org.au

We now have 11 of these DVDs available:

Christine Uren spoke about her memories of growing up in Linton in the 1950s and 1960s. Christine’s father, John (his adopted Australian name) Kvapil, was a resident in the Displaced Persons’ Camp at Snake Valley after World War 2. Christine spoke about her father’s previous life in Czechoslovakia, his daring escape across several borders at the end of the war and his eventual arrival in Australia as a displaced person in 1949.

Memories of Mannibadar
Long-standing resident of Mannibadar, Graeme Ellis, spoke about the history of this soldier settlement community south of Linton, and shared his memories of his family’s experiences, and the experiences of the other families who settled in this often unforgiving environment.

Verdoorn Family – Linton memories
The Verdoorn family emigrated from the Netherlands in the mid-1950’s and came to settle in Linton.  Two of the Ver Doorn sons, Gerry & Hans, spoke about there memories of this experience and of growing up in a small country town.  With two locals having such a unique take on a Linton childhood, this was an interesting and entertaining evening and proved to be extremely popular!

Grigg family – Linton memories
Brothers Chris Grigg and Bill Grigg spoke about their many family history connections in Linton and reminisced about their own experiences of growing up in Linton in the 1950s, ’60s and 70s.

Lewers family and Linton
Robert Lewers, a descendant of Samuel Lewers, the first bank manager of the Bank of New South Wales in Linton, a JP and the first President of Grenville Shire when it was formed in 1864, spoke about his family history and their connections with Linton.

Kerr family and Linton
Aaron Kerr, a fifth generation Lintonian, a fifth generation Lintonian and who is related to the Preston, Cornish, Morgan and Kerr families, amongst others, speaking about growing up in Linton in the 1980s and recounting stories told to him by his ancestors and sharing his amazingly detailed memories of Linton’s history which they passed on to him.

O’Beirne family and Linton
Rod and Joan O’Beirne, who were longstanding residents of Linton, speaking about the O’Beirne family’s history in the town, and their own memories of living in Linton from the 1950s to the early 2000’s.

Stapleton family memories
Jim Stapleton, a remarkable 98 year old ex-resident of Linton, speaking about his memories of Linton in the 1930s.

Below is a list of charges  for photocopying of standard material (upto A4 size) and photographs and professional printing of photographs:

Photographs from Society's Collection Taken with Personal Camera
$2.00 each